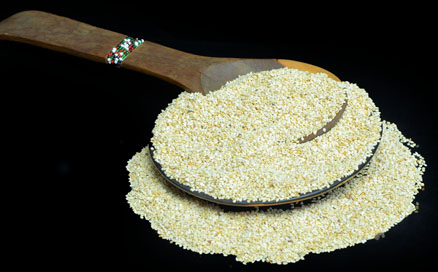 Sesame (Sesamum indicum) is a flowering plant in the genus Sesamum. Numerous wild relatives occur in Africa and a smaller number in India. It is widely naturalized in tropical regions around the world and is cultivated for its edible seeds, which grow in pods. Sesame seed is considered to be the oldest oilseed crop known to man, domesticated well over 5000 years ago. Sesame is very drought-tolerant. It has been called a survivor crop, with an ability to grow where most crops fail. Sesame has one of the highest oil contents of any seed. With a rich nutty flavor, it is a common ingredient in cuisines across the world. Sesame, like other nuts and foods, can trigger allergy reactions in some people. The world harvested about 3.84 million metric tonnes of sesame seeds in 2010. The largest producer of sesame seeds in 2010 was Myanmar. The world's largest exporter of sesame seeds was India, and Japan the largest importer. It is an annual plant growing 50 to 100 cm (1.6 to 3.3 ft) tall, with opposite leaves 4 to 14 cm (1.6 to 5.5 in) long with an entire margin; they are broad lanceolate, to 5 cm (2 in) broad, at the base of the plant, narrowing to just 1 cm (0.4 in) broad on the flowering stem. The flowers are yellow, tubular, 3 to 5 cm (1.2 to 2.0 in) long, with a four-lobed mouth. The flowers may vary in colour with some being white, blue or purple. Sesame fruit is a capsule, normally pubescent, rectangular in section and typically grooved with a short triangular beak. The length of the fruit capsule varies from 2 to 8 cm, its width varies between 0.5 to 2 cm, and the number of loculi from 4 to 12. The fruit naturally splits opens (dehisces) to release the seeds by splitting along the septa from top to bottom or by means of two apical pores, depending on the varietal cultivar. The degree of dehiscence is of importance in breeding for mechanised harvesting as is the insertion height of the first capsule. Sesame seeds are small. The size, form and colours vary with the thousands of varieties now known. Typically, the seeds are about 3 to 4 millimeters long by 2 millimeters wide and 1 millimeter thick. The seeds are ovate, slightly flattened and somewhat thinner at the eye of the seed (hilum) than at the opposite end. The weight of the seeds are between 20 and 40 milligrams. The seed coat (testa) may be smooth or ribbed. Sesame seeds come in many colours depending on the cultivar harvested. The most traded variety of Sesame is off white coloured. Other common colours are buff, tan, gold, brown, reddish, gray and black. Sesame seed is sometimes sold with its seed coat removed (decorticated). This is the variety often present on top of buns in developed economies.

SolarTech have unrivalled experience in the design, installati

Different kind of paper products can be found here

The lentil (Lens culinaris) is an ed