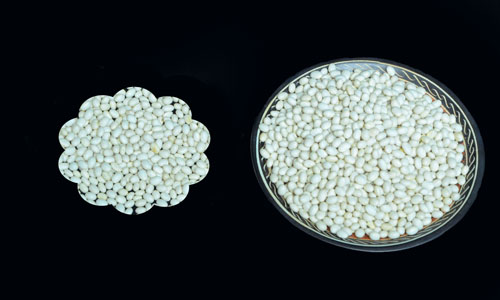 Haricot bean, haricots verts, great northern, navy bean, French navy bean, pea bean, California bean are members of a large family of "white beans" and best known as the beans popularized by H.J. Heinz of Pittsburgh. Haricots verts simply means "green beans" in French. Native to Central America, it is the most important legume cultivated in Europe and North America today. It also grows in other temperate and subtropical regions of the world. The plant was first domesticated more than 5,000 years ago; and, by the time of the arrival of Europeans, numerous varieties of varying sizes and colours were being cultivated in the North, Central, and South Americas. The first samples to reach 16th century Europe were the dark red, kidney-shaped variety which earned them the name of "kidney beans". In France, its Aztec name of ayecotl was soon corrupted to haricot, a name which also meant a meat (ragout), and derived from another word meaning to cut up (harigoter). While the French still use haricot as a general name for a bean, the English use it now only for the small, white, dried bean. HThe haricot bean starts out as pencil-thin, green pods, hand-picked when just the right size. It is considered to be a great delicacy in France. Most haricots sold in the US come from Central America. When dried, haricots become small, white, oval-shaped and can be found in traditional dishes from the Middle East to Italy, France, Greece, and North America, particulary as the main ingredient in the American dish, Boston Baked Beans. Haricot bean plants show two distinct patterns of growth: pole beans, which develop into vines and need support, and the bush or dwarf beans, which grow on low plants. There are numerous varieties of both that have adapted to various climates, countries, and market requirements. Haricot beans contain many varieties including several that are black, as well as the familiar white. There are four main ways to consume haricot beans: They can be picked early and the tender pod consumed. The French or snap beans are a good example and can be either green or yellow. The beans can be "popped". These are known in the Andes as nuñas, which burst out of their seed coats when heated in a little oil and open like "butterflies spreading their wings". The result tastes a little like roasted peanuts. These were developed for high altitudes where water boils at too low a temperature to permit cooking ordinary dry beans. The fresh green beans can be eaten without the pods. Of the many varieties, most are likely to be called shell or shelly beans, meaning that the seeds are extracted from the pods and eaten fresh rather than dried. The best known is Flageolet bean, but there is another called the cranberry bean grown in Argentina and Chile.

SolarTech have unrivalled experience in the design, installati

Different kind of paper products can be found here

The lentil (Lens culinaris) is an ed